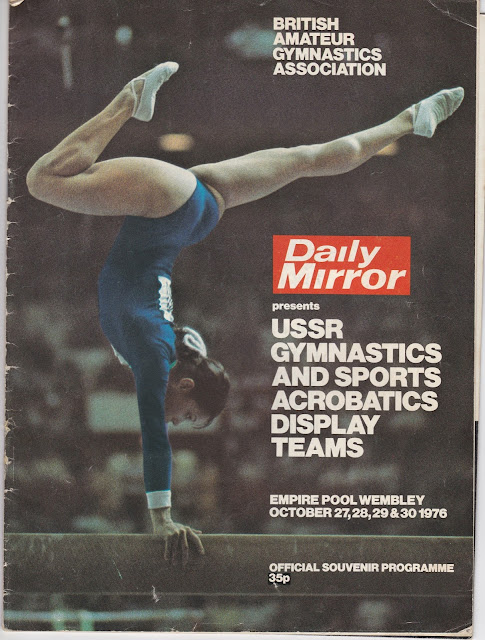 I saw the poster on the wall of the gym and it surprised my teacher when I asked if I could go.  She had noticed that I didn’t exactly love PE …

But I loved gymnastics and I wanted to see my favourite, Olga Korbut.  My friends Elaine Richardson, Janet Brooks and Mary Andronowski wanted to come too.

We set out in the school coach, all of us excited.  I wore my best purple dress and purple eye shadow and had my little Kodak camera in my bag.  I remember the excitement when we arrived and parked up at Wembley, only a few steps away from the Trident studio where rock band Queen had recorded some of their first album!  I half expected to see them there :-).

We found our seats, up in the higher echelons of the Grand Tier.  There was a strong smell of popcorn.  Scampering school children made the boards beneath our feet echo, seats around us snapped up and down, lending the impression of an ever moving sea rather than an attentive audience.  But I was transfixed.  It was my first time to see gymnastics live; I wanted to experience the magic of Korbut and her team up close.

Then – bang! – the lights went down and we were plunged into blackness.  ‘Wooooooooo!!!’  The sudden darkness stilled us all and imposed a feeling of anticipation – then the spotlights began circling the arena; the band began playing; and finally, the announcer introduced the triumphant team. Olga, with her smile; Lioudmilla, waving to the crowd, all the gymnasts perfectly turned out, smartly marching in, wearing their navy blue tracksuits!  I can still hum the tune – that smell, those sounds, immediately take me back over forty years.  I learned to stamp my feet, to clap my hands till they were sore.  And for weeks afterwards there was only one subject of conversation.  I read the programme (picture; look at the creases and crinkles!) till the pages feel apart and can still recite some of the content by rote. For example, a profile of gymnast Paata Shamugia, whose coach Leonid Arkaev had ‘informed the boy that gymnastics would be his main occupation from now on’, rather than football.

Olga, Nelli, Liudmilla, Maria and Elvira; Alexander and Nikolai; the marching band and the smell of popcorn are always there, the heart and soul of my gymnastics.  The pyrotechnics of today’s competition experiences may be more expensive, but they will never be more special than my very first gymnastics dream come true – seeing the Soviet gymnasts in person.

This floor routine is from a US Display in the same year – but you get the impression and a little bit of the joyful, informal feeling that was characteristic of these events. Olga Korbut was more than an entertainer – more than somebody who simply captured hearts.  Look at her line, precision, the beauty of her movements.  She was an innovator, a truly artistic gymnast.  And even though the ‘stunts’ she performed – daring, risky and inventive – caused controversy and disapproval in parts of her home country and amongst some of the wider gymnastics community, she never lost that special polish that distinguished the outstanding from the excellent. The genius of these gymnasts was how they made the impossible look simple; they were consummate performers for whom the technical and difficult was merely the fundamental, basic requirement of a routine. They were more than just athletes wanting to win; they competed with grace and elegance to elevate gymnastics to an art form. We can learn much from them today.

Elena Eremina asks for help for her gymnastics school

On Stage VS Off Stage Coaching — Happy Gymnastics

Not so fast Great Britain. Sister Act 3: The Olympics.

Concussion in rugby players: Saliva samples to be used to diagnose...

What Do Athletes Do With Their Money? | I AM ATHLETE...